It was a sloppy job. Got kinda cold and wet up there. But I left my first geo-cache at the top of a hill, bushwhacked up from Bear Gap. It is one of the old ammo boxes from 25 years in the garage wrapped in reflective tape. There once was a gap named Bear,
who had a cache 6 thou in the air.
The cache it did shine
by flashlight at nine.
The car … … without spare.

The media is famously innumerate. And, credulous with numbers.

So, when I read crowd estimates of yet another march on Washington – this one headed by a recent celebrity, Glenn Beck, I got curious.

The media, no friends of Beck, had the numbers slightly under 90k. Beck people seemed to like 4 or 500k.

That seems like enough of a difference to check without a lot of trouble.

So, here is the best picture I could find of the crowd as a whole: 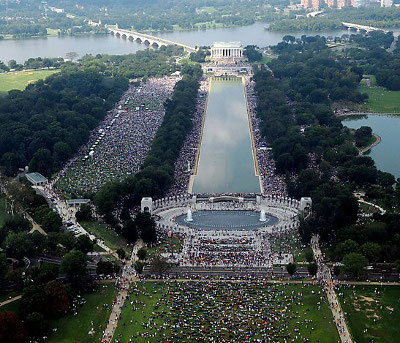 One of the odd things that struck me was that there were so many photos of parts of the crowd and area, but none of the whole thing. I imagine it’s hard for political-security reasons to get a plane up in that area, but, golly, where are the raw images and wide angle lenses?

Anyway, from this and other pictures you can do a quick guesstimate by simply figuring everyone is packed in the areas to the north and south of the reflecting pond, from the Lincoln Memorial to the WWII Memorial.

OK. This is a really, really rough count. What’s wrong with it?

#1: With regard to outsiders: Yes, this skips everyone right at the Lincoln and those people in the picture’s foreground on the hill to the west of Washington. But, I figure that they all can be moved to relatively empty spots in the big rectangle. The crowd’s kinda sparse in the southeast. There seems to be a sparse area half way down on the south side. Anyway, we’re talking percentage differences here. Nothing to write home about. Density estimate inaccuracies dwarf the outsider effect.

#2: Time? I’d have a hard time believing that the total crowd for the day would be more than, say, 50% higher than a high-crowd snapshot. The original .jpg doesn’t have any useful EXIF information, by the way, so I’m assuming that it’s close to high-crowd time. Other, on-the-ground photos don’t seem to refute this notion.

#3: Density. Yes, there’s the nub. If you make it a really tight crowd, then you could quadruple the density. (Double density, that is, causing 4 times as many people to be counted.) But, that’s getting the whole crowd in to some pretty serious intimacy. No room for lawn chairs and coolers. Anyway, taking in to account camera angle and telephoto lens effects for the on-the-ground photos, I’m wondering whether 4 people per 10^2 is a wee bit high. But, even if it is, I figure throwing the outsiders in to the big rectangle will make up for it.

Bottom line on this guesstimate: 60 to 100k people.

Oh. And one more count for that hippy girl in the pool shouting, “Forest!”.