After spending yet another several hours fighting the good fight, it seems like a good idea to note how to use rsync on a troublesome ssh connection – one that both requires a password and that is slooooow to get logged on.

First, the problem of the password is solved using sshpass. It allows you to put the password for the remote system in a file. The file, we presume, is stored in your ~/.ssh/ directory and has its permissions set so that only you, the user, can see it or do anything with it. In that way, it works like an ssh key file that you might tell ssh to log in with using the “ssh -i ...” command line option.

Second, to allow for a slow server, use something like this as an option to ssh:

That is, tell ssh to wait for 45 seconds for the slow server to get you logged in.

So the command line to get a connection to the server is something like this:

All well and good. But that command line won’t work under rsync. The connection will be made, then instantly dropped. And rsync hangs.

But, here’s the deal: rsync will be happy if the connection is already made in another terminal, and you have configured ssh to allow connections to go through a “master” connection – that is, tell ssh to not log in normally, but to rather use an existing ssh connection.

For clean-up reasons, you put the sshpass command in a separate .sh file which we’ll call ssh_to_bonzo.sh.

So now you run that ssh_to_bonzo.sh script in a “SCREEN” – sort of a virtual terminal window!

Once this code is run, you can rsync away, though with the world’s worst command line.

Or something of that sort.

Notice the pkill ssh_to_bonzo.sh at the end. That cleans up the screen operation.

Note, too, that you must still give the sshpass command line to the rsync --rsh option.

Not sure how often you see Google Maps cars in the street view images, but it appears that they played conservative in this region of the world:

A car at click-here on Google Maps: Recently, a group down in Berkeley pulled together temperature measurements from all over the world for the last couple hundred years.

And they published their results in graph form: 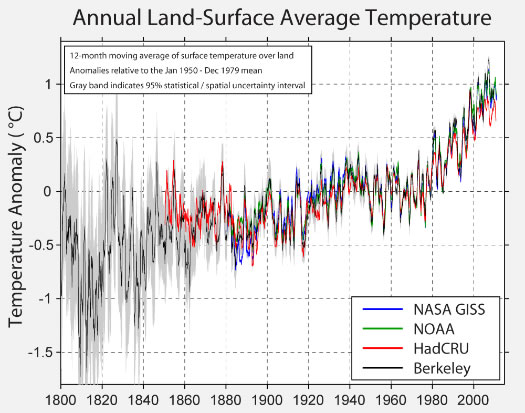 The usual flurry of noise followed their press release.

I did not read of anyone asking the immediate question this graph raises: